So we took to the task to find the top five best survival knife models on the market so you can be better prepared when the next disaster strikes.

From high carbon steel to ergonomic grips and more, these are the best you’re going to get.

You can’t be caught in the middle of the wilderness or in a SHTF situation without a quality pocket knife. It’s the most essential piece of gear.

Not only can you use it for simple tasks like cutting fishing line and whittling, but you can actually clean those fish, prepare wild fruits and vegetables, and even tear away clothing in a flash if you need to access a wound to clean it.

He’s everyone’s survival specialist, and he’s got his own knife deal with the most trusted brand in the world for survival—Gerber.

You know if Bear put his name on something, it’s got to be good.

Even when you’re being as objective as possible during the review process like we were, you have so much fun with this knife.

Everything about it feels precision optimized.

The handle weight is perfect, the grip feels like it was meant to rest in your hand, and the fire starter is just difficult enough to get out that you know it’s not going to fall out at random.

Gerber even gives you an extra long sheath to allow for attaching to the inside of your leg, or in a tall boot.

It’s made of nylon, so it’s durable enough to get you through the knife’s entire life cycle.

About that life cycle: you’re going to have this for quite a long time. The blade is made of high carbon steel, which means you don’t need to sharpen it that often.

The carbon protects the metal from corrosion and rusting, keeping the luster on this blade for years to come.

As the second best fixed blade survival knife, we had a hard time not crowning it the champion here. StatGear may not be as widely known as Gerber, but it should be.

This knife comes with just about every benefit we talked about on the last one.

The handle is perfectly weighted and feels great in your hand, so there’s an even weight distribution across the board.

On top of that, it comes with a more durable sheath than the top pick. Nylon is nice, but StatGear included a hard plastic case with some hidden benefits.

There’s a rope cutting tool built right into the handle, as well as a fire starter rod that protrudes out slightly.

One reason we love this knife is that the entire kit is versatile. Instead of having the fire starter in the handle, like other knives do, they put a steel striking pommel.

This comes in handy for utility, but also to break car windows in the event of crashing into the water.

You don’t get a carbon coating here, but you do get a 440 grade stainless steel blade, which makes for some serious power and corrosion resistance.

Last but not least, you’ll notice the green segments in the top of the handle and the hilt near the striking pommel.

Those glow in the dark, so you can always be oriented during use, even in the pitch black night.

It’s called the best survival knife in the world, and it’s arguably the most well-known. While it didn’t rank top on our list, that’s only for some minor reasons.

This knife is the very epitome of power. The blade itself is 7” long, which is excellent for survival and warding off assailants, as well as defending yourself against animals.

That blade is also made from 1095 gauge cro-van steel, making it a powerhouse to be reckoned with. Because of the length, KA-BAR had to make this a bit thicker as well.

While it is sharp, the angle isn’t so thin that it’ll get bent out of shape, even if you’re striking off fish heads or using ir around the clock for utility purposes.

So there’s no fire starter, and there’s no compass, or any add-on like that. You get a leather sheath (a rather handsome one, I might add) and the knife itself.

The handle is fitted with durable leather, giving you excellent traction and dexterity. This knife grants control.

Now we’re getting into the money-saving, budget-friendly knives. Ontario mimics what you already know and love about the KA-BAR that we just discussed.

The handle is similarly constructed—segmented leather for extra traction. Your fingers sort of fall into the inlays and keep everything nice and steady.

The thing is, Ontario wanted to add a little something extra. The sheath they made is great, and fits the length of the 5” blade properly, but it has a hidden secret.

It has a sharpening stone on the underside.

You’ll never be left with a dull edge again. If you’re careful, you can even hone it by holding the sheath at an angle.

First and foremost, it’s a capable blade that has everything you need. The hilt isn’t a striking pommel, but can be used to hit tent stakes and perform other simple tasks as well.

Last but not least on our quest to find the best survival knife for the money, we came across Mossy Oak.

This thing is not messing around.

It’s a lot of actual blade for the money—fifteen inches, to be exact. It’s a monster of a knife, and it’s not exactly something you can get caught driving with.

But it’s very simple. Mossy Oak wanted to provide the biggest knife for the money, and they did exactly that; nobody can compare to this in terms of value.

They made this out of 440C stainless steel for longevity, and the knife itself is optimized to withstand a lot of stress. It’s not all about the size in this instance.

You’ll also get a knife sharpener and a fire starter along with your purchase, which is pretty wicked.

The serrated section you see on top is fairly useless, as a fair warning. You could possibly use it like a saw, but it’s not the reason you should be buying this knife.

This will be slightly dulled when it’s shipped to you. One five-minute sharpening session will take care of that. This will be what you reach for when the walls come crashing down.

What is a Survival Knife Used for?

What can’t a survival knife be used for?

Here are a few examples of what a survival knife can be used for:

Those are just a few of the primary reasons you need a survival knife. It comes in handy for defense, as well as utility.

In our opinion, it isn’t enough to just have one. If you get a kit to go in your bug out bag, be sure it comes with a basic fold out survival knife.

What Should I Look for in a Bushcraft Knife?

People often think that bushcraft is a brand, but it’s actually a knife type.

A bushcraft is usually made of the best steel for survival knife use, and is designed to be thick (3” to 6” on average).

A bushcraft can be used frequently and heavily without worrying about ruining it. It’s designed for heavy duty use.

Bushcraft knives also have a sharp blade that’s better designed for hunting and cleaning fish, not necessarily for utility.

You can have a bushcraft alongside a more utility-based survival knife, such as one with a fire starter and compass built into the handle, and all that.

Lastly, bushcraft knives usually don’t come with anything other than a sheath. They’re built tough, but aren’t meant to dazzle (unless you love knives like we do).

Should a Survival Knife be Serrated?

Absolutely. You’ll see that the best full tang survival knife models have a slightly serrated section. That’s because it’s used in utility, not just for self-defense.

People often think that a survival knife, based on the name, is always used in gritty situations with a dodgy outcome. It’s far from that.

It’s about using it to your advantage in as many ways as possible.

A serrated edge helps you cut fishing line, rope, snares, and can even be used medically to help remove dead or diseased skin (obviously that’s a very rare instance, but it does work).

The serrated edge should not be the full length of the blade, though. That would nullify much of its versatility.

You’ll want to use the straight edge when cleaning freshly caught fish or game.

Your straight edge is also easier to sink into an attacking animal since less power is required, making it better for self-defense.

In short, you want a 2:1 straight-to-serrated ratio, if you can get it.

How to Sharpen Your Survival Knife

Sharpening your knife comes with two steps. This isn’t designed to be done while bugging out or on-the-go, so have your tools and designated space ready.

We recommend using a sharpening stone. Not a moving one, but a brick like you’ll see Japanese chefs use to sharpen their cutlery.

These last for ages, and you actually need two different grits to sharpen your survival knife properly, since it has to be razor sharp.

First thing’s first: you need to shave down the blade.

Find a low grit, like #400, and start there. Hold the blade at a 23° angle, and with one hand on the handle and one on the back end of the blade tip, bring it up the length of the stone’s edge.

Do this ten times (might require more for high carbon steel blades). Now perform the rest on the other side.

We’re choosing 23° because it’s slightly wider angled than the edge is actually going to be. You’re creating a slight bevel to increase resistance and prevent bending.

After this point, it’s time to hone. If you don’t hone your blade, you’ve wasted your time.

Using a honing rod, bring it along the edge of your blade at the angle of the edge. You don’t have to go as hard as you did when sharpening.

Honing doesn’t remove metal like the stone does; it straightens it out. The vibrations and slight pressure straight the blade so it can actually perform a clean cut.

If you don’t hone, you could strike and not have nearly as much power or do as much damage as you think.

Once honed, your blade is fully set to be stored in the sheath. It’s ready for action.

Utility and Self-Defense in the Palm of Your Hand

There’s an insane amount of benefits to having a quality survival knife, as you now know.

You never know what you’re going to need to use it for, but when that need arises, each of these knives we’ve reviewed today will be up to the task.

Between self-defense and self-preservation, you’ll feel naked if this isn’t in a holster or belt clip right by your dominant hand.

Keep the blades sharp, your wits sharper, and you’ll do just fine in any situation. 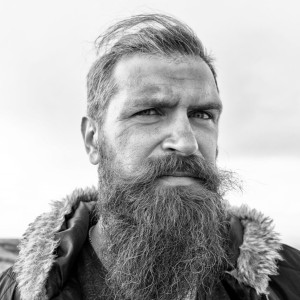 Gabrial Holt
Birthed from a lineage of United States military men and women, Gabriel raises his own son with the same core values that have kept their family together for as long as history can date back. He’s prepared for everything from a fallout to mass hysteria and global panic with his knowledge of bugging out, bugging in, tactical gear and how to stay calm in numerous stressful situations.

What is the Best Food for Preppers: 8 Top Picks